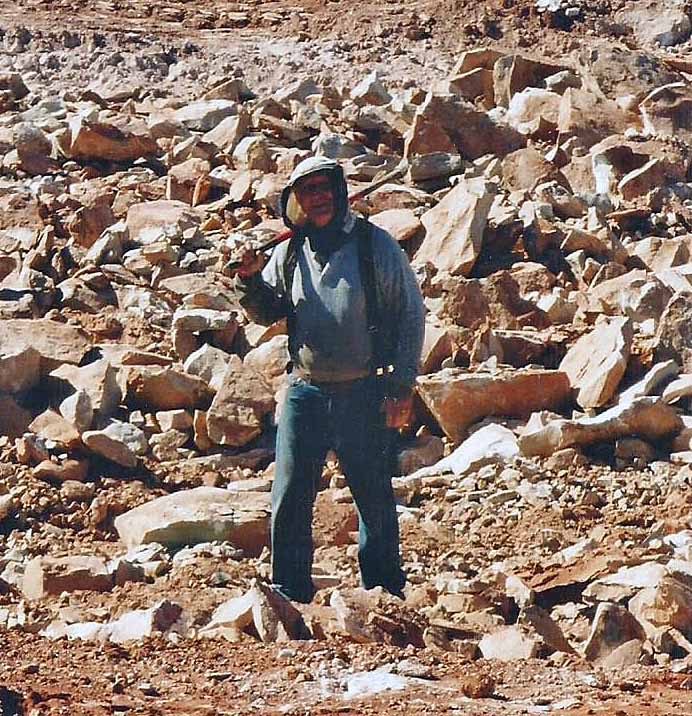 Dan Tucker, with his pick over his shoulder, at his mine at the Airport Field in Mintabie. He's smiling, not because we are taking his picture, but because they have found opal!

7/03/01:  We were up fairly early, ready for a trip to Mintabie.  It was another lovely day in the outback.  Breakfast was served ala rest stop, cold cereal, coffee, and juice.  We stopped at Marla for some fuel, and then headed west off of the pavement on the 45km long gravel road to Mintabie.  The road was very rough, with washboards (corrugated, as the Aussies say), and the travel was slow (30-50 kph).    We finally saw some galas (ah, now I’m in Australia), and a big flock of very white cockatoos (Little Corella) and watched them pick paddymelons from the side of the road, fly up over the road and drop the paddymelons exposing the seeds…which they would then eat…pretty ingenuous little guys.  Darlene tasted these cute little melons earlier, and now knows why they are left to the birds!  They are horribly bitter!

We soon came across a vehicle that had broken down, and we gave a lift to a miner from Mintabie, Charlie Butcher, an older Italian gentleman.  Once arriving in Mintabie, we called the Tucker’s and they came and got us and guided us to their camp.   At their abode, we hopped in their vehicle and were taken to the mining site to see the crew in action (open cut mining).  Breaking for lunch, we enjoyed good opal talk and viewed the drilling specimens…they were on opal!  After lunch, we were taken on a tour of the Mintabie mining fields: Old Field, Crystal Valley, and the new Airport Claim.  The ground here is unlike Coober Pedy, in that it is very hard. The opal is formed in hard Mintabie bed sandstone and the opal in Coober is formed in softer weathered Bulldog Shale.

Dan walking behind a D9 Caterpillar checking for opal that may be exposed when the big D9 Caterpillar rips up big pieces of hard Mintabie Bed Sandstone…where the opal is formed in lenticular (lens-like) deposits.  These lenticular occurrences of opal are sometimes called “Mintabie-plate opal” as, at times, they are about the size and shape of large dinner plates.

We were able to visit a neighbor’s mine where the underground mining is accessed through cuts down to the level, and then tunneled into with a bobcat.  The miners were preparing for blasting…drilling holes for the bombs (they needed 12 bombs instead of the 8 at C.P.).

Back to the Tucker’s place to enjoy the birds and gardens, before meeting with a miner who had opal to sell…Max Novelli.  We made a deal with the miner and bought several parcels of hard to find Mintabie opal.  Payment and pickup of the opal will be on Friday, when we will return to Mintabie.  We made the rough drive back to Marla to spend the night at a caravan park in our tiny minivan conversion campervan.