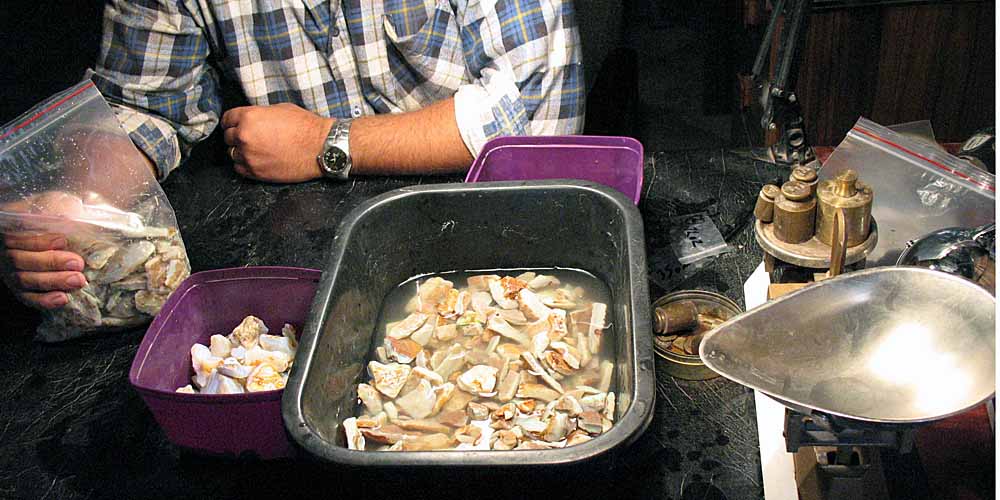 Large parcel of opals presented to me by Tim Seekamp in his dugout.

5/22/08: Tim Seekamp stopped by around 8:00AM and I followed him down to the new diggings at Opal Ridge.  Tim and Paul Reynolds were going to drill for opal with a large Calweld drill.  While drilling the first 1-meter diameter hole the main support cable separated and began to break away from the main 3.5-ton drilling member.  What could have turned out to be a very dangerous operation, was solved by Paul, when he lowered the drill member onto the gantry while manning the controls almost directly under the huge drilling member.  But a new cable was available at Paul’s home and would be changed out safely the next day.  Drove back to Coober and had chips and a Greek yuro sandwich for lunch at John’s Pizza Bar and Restaurant.  John’s Pizza is one of my favorite places for lunch in Coober and has great breakfast and pizza as well.

Stopped in and had a nice long visit with Anne Johnson.  Anne and Joe became lasting friends when we stayed at their B&B in Coober during our first trip to Australia.  Anne is also a writer and wrote a very interesting book about mining life in Coober Pedy: “Digging Around Coober Pedy”.  Also bought 4 more jars of home canned quandong jam from Anne.  These will be gifts for friends in the USA.

Washed clothes in the afternoon and John called and said he had cleaned up the Allan’s Rise parcel and I could come over and have a look.  So I walked over to his home and viewed the gorgeous parcel…a LOT of opal at a good price…about 300 ounces of opal in the lot, including the potch & color grades.