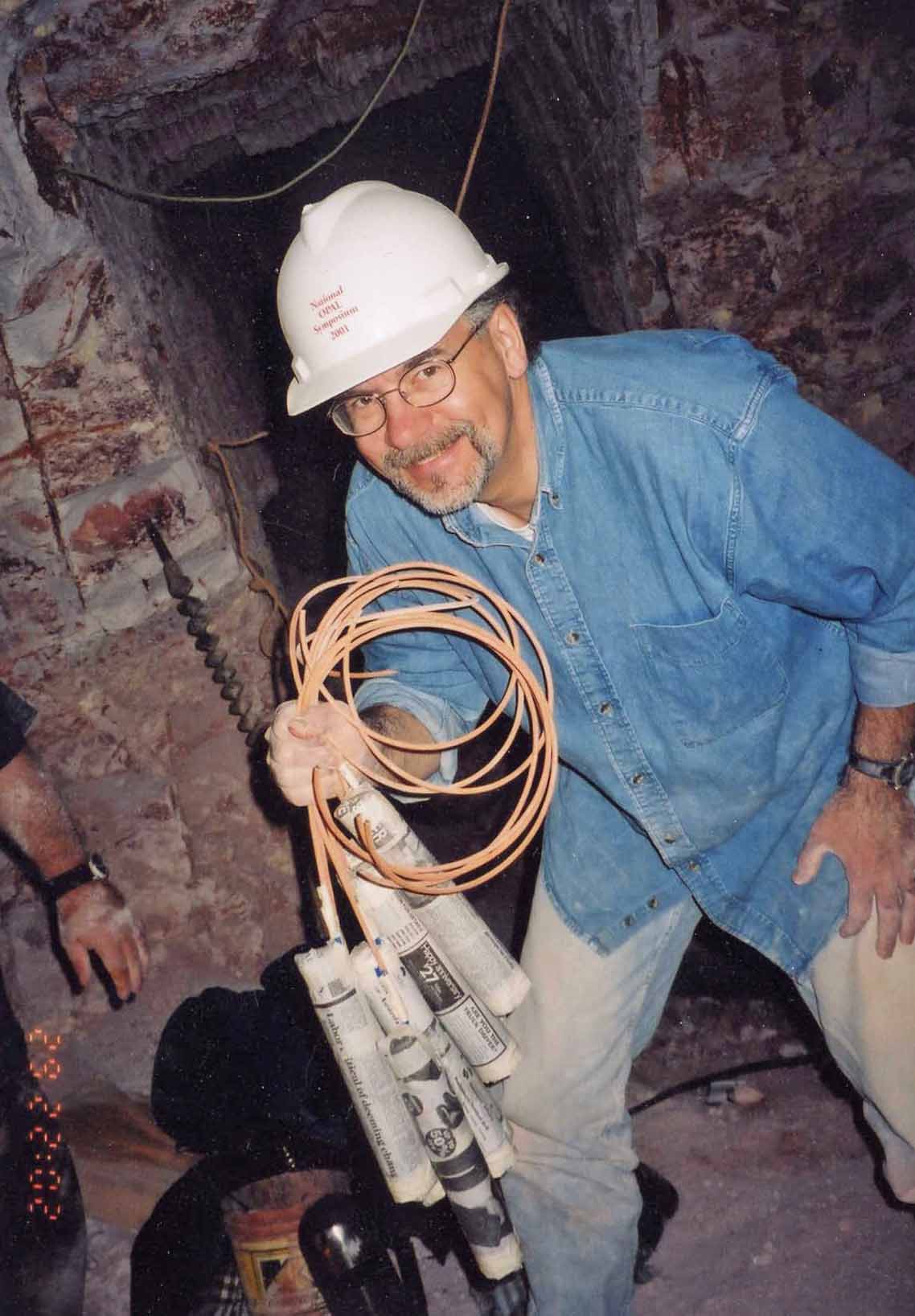 Mining with Trevor, Brian and Darlene, Steve was asked to hold 8 ammonium nitrate explosive charges used for opal mining, for a pohoto. The smile is forced. I was honestly a bit nervous.

6/30/01:  We rose at a decent hour, finished cataloging the balance of the opal we had purchased, and headed up to Trevor and Rose Berry’s home…we planned to go mining with them that day.  We rode out with the oldest member of the mining crew, Brian Sparrow.  And heard all the local history on the way, and met the others at the mine site (15-mile field).  The mine was about 60 feet deep, and access to it was with the aid of a winch and sling (powered by the generator mounted on the vehicle).  We donned our hard hats, and were shown how to sit in the sling (really not sitting, but balancing the upper half of your butt on the sling, allowing your feet to hang straight down the mine shaft, one hand holding the switch for up and down, the other arm to hang on to the sling top).  I was second to go down, Steve was third, and the last mine owner was fourth.   Once we were down in the mine, we walked through a tunnel, getting caught up on the details of how areas were mined and the findings.  An extra length of blower pipe had been lowered down the mine for the removal of dirt.  We explored the immediate area, picked a little, and then watched the miners prepare the area for the laying of the blower pipe.  The blower sucked out some existing dirt (men shoveled the dirt into the blower) and prepared the area for some bombing.  Once the pipe was laid, one of the miners drilled holes in the wall (8 of them) about 1 feet deep, 2-3 inches in diameter).

Steve just bottoming out, on his 60ft ride down into the opal mine.  The smile betrays his thoughts: “I think I smell opals”.

We took a break for some sandwiches, coffee, and cake, all the while watching the homemade charges being made.  The casing for the charges is made of newspaper, rolled into a hollow tube about 2” in diameter, one end folded and taped to secure the bottom.   The det cord is inserted into the paper casing allowing 2-3 inches to extend out the upper end.  The paper casing is then filled with a mixture of ammonium nitrate and diesel fuel.  It is tapped gently on the outside to allow the mixture to settle and pack into the newspaper casing.  Once filled to satisfaction, the top of the paper bomb is folded down and taped into place.  A blasting cap is crimped onto the det cord and then taped onto a very slow burning fuse.  The blasting charge is now complete.  Steve was a bit nervous when the miner asked him to hold all 8 bombs in his hand.  We watched them place the bombs in the drilled holes, tamp them in place…we backed off of the area and peeked from the assigned place.  The blower was then turned on (to suck the dangerous fumes out of the mine, after the explosions), and the other miner lit the fuses and joined us.  We waited and then as each explosion went off, we counted until we had all 8.  The noise was expected, but the amount of concussion from them was a bit surprising.  We ventured down the tunnel, to inspect the area, quite aware of the amount of explosion gasses we could still smell.  Though the brown explosion gasses were visible in the mine tunnel, we watched as the blower cleared the mine of the fatal gasses.   The odor was strong (at least to us) and smelled much like smokeless powder.  Opal was not to be found at the blasting site.

We continued exploring different tunnels; trace shows being pointed out to us.  Steve did some picking and did find an opalized shell skin, but no color in it.  The day was slipping way, Steve acquired several blisters from picking, and we were ready to go home.

The sling was lowered; one miner, me, Steve, and finally the last miner went up the sling.  As we prepared to leave, Steve noticed the vehicle had a flat tire.  The tire was changed, and we picked up another miner, Louie, who was mining at a claim very near this one.  We rode home, happy and dirty…stopped to look at another parcel (and bought it) before the showers were found.  A marvelous evening meal was shared with our B & B hosts in their home.  We were tired, full, and very happy.