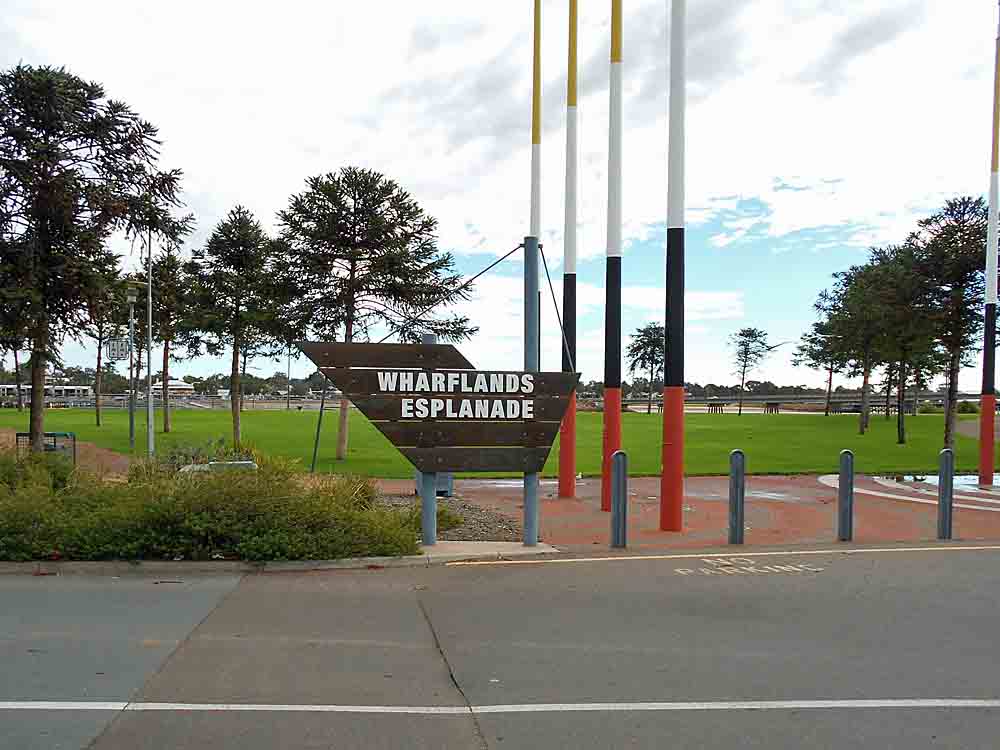 Cereal breakfast and press coffee in the camper after a shower in the ablution block (sounds like a painful form of torture).  Only an hour and a half drive to Port Wakefield but the scenery is much changed from that north of Port Augusta.  Just north of PA it consists of desert-like outback scrub consisting of mulga trees, saltbush and spinifex.  South of PA the vegetation turns to gum trees and agricultural paddocks.  I’m no longer on the Stuart Hwy, now it’s A1 or the Princess Hwy…love the name.  As I near the tiny hamlet of Lochiel there’s a small semi-dry salt lake: Bumbunga Lake (hmm…sounds painful as well).  It was once used for salt production which seems to be abandoned now.

The remaining drive to Port Wakefield is mostly agricultural lands or mangrove lowlands as the road approaches Spencer Gulf.

Checked into the Port Wakefield Caravan Park and opted for a small cabin.  I’ve stayed here many times on previous trips to Oz and found there were new owners in charge.  Very friendly people.  Took a 50 minute walk on the lowland trails near the gulf, but the mangroves prevented getting close to the actual water.  Cleaned the camper thoroughly and packed my bags for tomorrows drive to Adelaide where I return my campervan and catch a cab to the Stamford Grand Hotel on Jetty road in Glenlg.

I had friends living in Port Wakefield who were in the opal business as well…Neil and Willy Tooth.  Willy had died suddenly about 3 years ago from pancreatic cancer.  And I thought that her husband Neil was still living here in town.  Their old house obviously had new owners so I stopped a neighbor lady walking to her car and asked her about the Tooths and was informed Neil had died less than a year after Willy died.  Quite a shock!  They were both good friends and I had stayed with them at their camp in Grawin on several occasions.  They were both around my age and Neil was originally from Canada.  The Tooths will both be missed!

Had a take away shrimp/calamari seafood supper from the Big Burger Shack…not bad.  Read more of The House of The Rising Sun then I was planning…stayed up late.  Guess I was excited about my return home.  And a little anxious about my drive through Adelaide.  It’s a big city and traffic can be brutal.