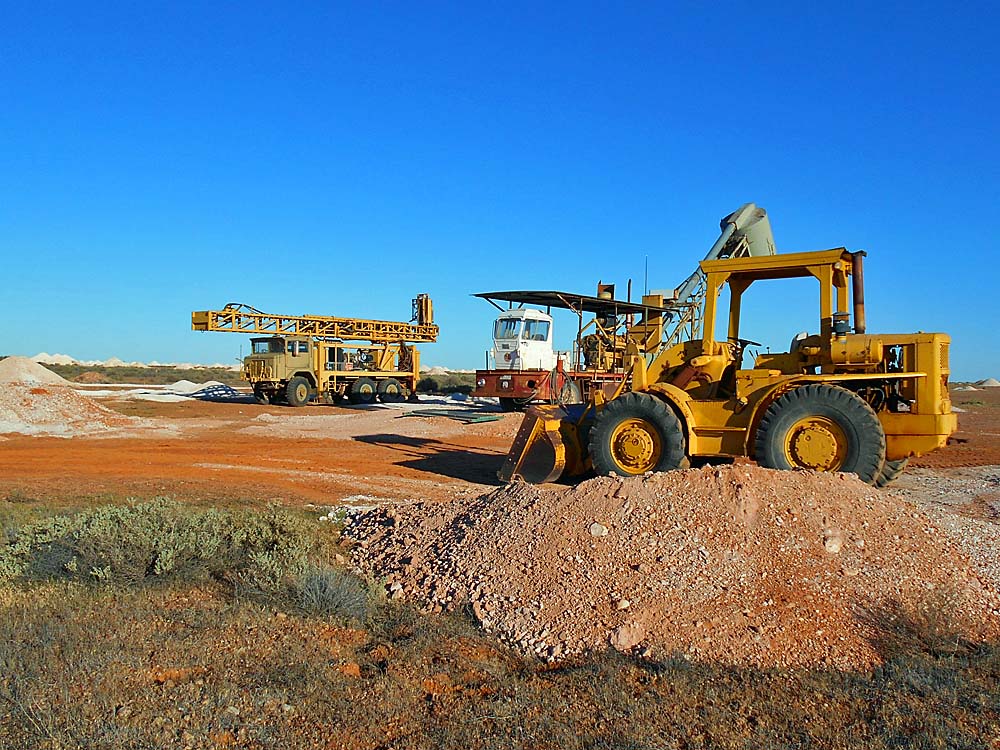 Lots of extremely expensive equipment is necessary for a productive opal mine today. Tim and Sam Seekamp's mine at Olympic Field in Coober Pedy.

Rose late and had an 8:30am brekkie at the Mud Hut Motel…bacon rashers, toast, fried egg, coffee and fried tomato…great breakfasts here!  As I’ve said earlier the service is great as well as the coffee and food.  The people here treat one more like family (in a good sense) than like  a paying customer.

Met Terri Brennan and bought several smaller parcels.  The first time I bought opal from Terri was in 2014, big multi-grade parcel of Dora Gully opal…I was glad to  get that large parcel…very nice opal.  Visited with Trevor Berry and bought another small parcel from my old friend.

Perhaps at this point I should clarify what a miner’s “parcel of opal” consists of.  Generally a parcel is any size group of opals found at a particular opal deposit location in the opal mine.  A parcel can be as small as 2-3 ounces or as large as several hundred ounces…a million dollar parcel is not uncommon.  Once this “parcel” has been found by the miners it is cleaned in a large tumbler, without abrasives, for a few hours, to remove excess matrix and dirt.  It’s then graded or classed into several grades of quality using several factors such as opal brightness, colors, size and the opals ability to be converted into cabochons for jewelry use.

There are miners in Coober Pedy, with a great deal of mining and grading experience, that will take a parcel of opals (on a fee basis) and grade and classify the rough opal and assign it into several grades such as tops, 2nds, 3rds, 4ths and on.  Tops being the highest quality of opal from this particular mine at this mine location.  A selling price is given to the entire parcel and, many times, each individual grade of opal in the larger parcel.  These miners are called “classers” and are given a percentage of the selling price of the opal for this job.  And on a big parcel this can be a very difficult job, but very lucrative.

Made plans to go out to Olympic with Tim and see his new mine.  He has a big tunneling machine so they need to drill 3-1 meter diameter holes, with a Calweld Drill, to lower it into the mine.  Quite a process!

Lunch at John’s Pizza…another gyro wrap and chips.  You’d think I’d get tired of them but the John’s Tzatziki sauce is great.  Then went for a long walk around town.  Back in my room in the evening and watched “A Study in Pink”…new Sherlock Holmes production put on by BBC starring Benedict Cumberbatch and Martin Freeman.  Interesting and well done twist on Sherlock Holmes.  I was kind of a SH groupy in my earlier years and read all of Sir Arthur Conan Doyle’s SH stories several times over.  So these BBC productions are a real gift to me.  Had a take-away supper from Outback Bar & Grill by the Shell petrol station…calamari, squid, chips and a salad.